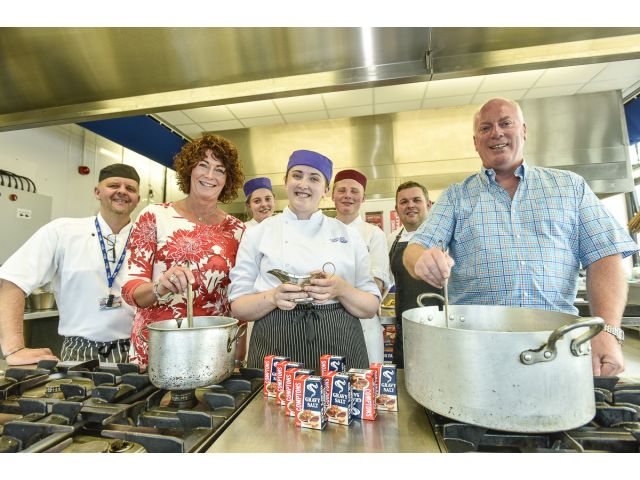 It may be essential to your Sunday roast, but who’d have thought you can mix gravy and ice cream?

Comptons Gravy Salt was well and truly put to the test earlier this year when we held the first World Gravy Championships competition.

Taking place at Carlisle College, eight fantastically talented student chefs battled it out to be crowned the first world gravy champion by creating their own unique dishes.

Each contestant was required to provide a boat of gravy and an accompanying dish, which was then tasted by the three judges - Quarter Lounge chef James Hill, college tutor Sean Downes, Comptons Gravy Salt owner and director, Janette Deyermond and co-owner Wilson Deyermond.

But that accompanying dish could be absolutely anything - which led to some innovative creations.

Going for a vegetarian, Moroccan-themed dish was Sarah Lewis-Briggs. She made a vegetable tagine, which was a mix of potatoes, courgettes, mushrooms, yellow peppers, cauliflower, vegetable stock, lime leaves, Compton Gravy Salt, tomato puree, apricots and with a bit of a kick from the Ras el hanout.

The winner of the competition was Andreia Crisan who made a fine dining dish with a loin of venison and accompanying vegetables. It looked (and tasted) amazing. She works at The George Hotel in Penrith - so if you’d like to try out her recipes, we recommend a visit.

When it came to imagination, there was no stopping our innovation award-winner.

Scott Melvin, who’s a chef at The Cottage In The Wood, decided to go sweet AND savoury for his World Gravy Championship dishes...

Not only did he create the most delicious beef dripping chips with Comptons Gravy Salt and cheese curds, but he also made the sweetest chocolate whoopie pies filled with salted caramel using Comptons and ice cream

The highly commended award was scooped by Rachel Harrison, also a chef at The Cottage In The Wood, whose ketchup flavoured gravy and Worcester sauce and juniper berries gravy was used to dip chicken skins, potato and beetroot crisps and puff sticks.

After such a fantastic first World Gravy Championship competition, we can’t help but think about what could be in store next year.

Like to know more about the competition winning dishes? We’ll be sharing World Gravy Championship recipes on our blog soon.